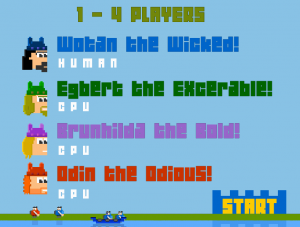 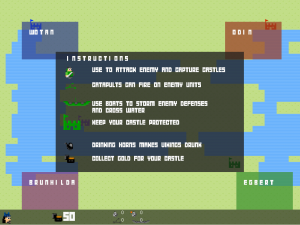 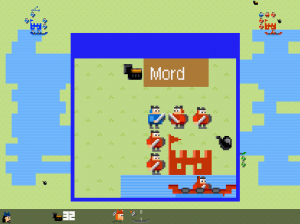 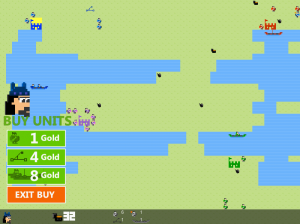 Choose 1 of 4 Viking clans and defeat the other computer or human opponents by attacking their castles.

Viking Invaders is a war game for 1, 2, 3 or 4 (any combination of human and/or computer) players. You can watch your Vikings move from their castles, fight with swords, board boats and sail down the Fjord, attack castles, seize gold from treasure chests and fire catapults.

Choose from Wotan, Brunhilda, Egbert or Odin and fight against your opponents.

LONGBOATS
Boats can be used to transport armies across the Fjord, or to ram an opponent.

CATAPULTS
Catapults may be fired once only each turn, after selecting the direction and distance.

DRINKING HORNS
Beware the evils of drink! If a Viking walks into (and empties) a drinking horn they will become uncontrollable!

To defeat an opponent you must attack their castle. Like real battles, this may take several attempts before you achieve success. All defeated armies, boats and catapults belong to the Victor. The WINNER is the player with the last castle and all the pieces.